How long does it take for the eggs to hatch?
The female lays one egg a day.  After she lays the last egg there is a two week incubation period before hatching.  Incubation does not start until all the eggs are laid and all eggs hatch on the same day.  Only the female bluebird incubates the eggs.

What is the difference between a blue jay and a bluebird?
Jays in our area are somewhat stocky and  10 to 12 inches long from tip of beak to tip of tail.  The beak is largish and heavy.  The Western Bluebird is 7 inches long.  The beak is short and pointed.  There are two common Jay species in the northern Willamette Valley.  The Scrub Jay has soft blue wings, tail and some on the upper part of the head.  They show a lot of grey on the shoulders, throat and breast. They have a rather prominent white eyebrow.   Steller’s Jays are mostly  dark blue with a very prominent black topknot or crest.  Both jays are noisy gregarious birds which tend to monopolize bird feeders and can be a real nuisance.  Neither have any red on the breast.
Western Bluebirds are about half the size of jays in both length and girth.  Western Bluebirds eat primarily insects and do not come to bird feeders where other birds are eating seeds or grain.  The male Western Bluebird has very deep blue feathers on the head, wings, back and tail.  The male and female have distinct rusty red breasts and usually have some rust color across the shoulder area.

Will Western Bluebirds return the next year to the same nesting box?
Generally, a pair of bluebirds that nests successfully will return to the same area to nest in subsequent years.  Even if one of the pair dies during the winter, the other bird may return with a new mate.  Also,the male offspring from the previous year tend  to return to the area in which they hatched, bringing their own mates.  The female offspring generally disperse over the winter and, if they find a mate, follow him to his natal site.

At what age do bluebirds begin reproducing?
Bluebirds generally mate the year after they hatch. Often they are less than one year old. Their lifespan can be up to 6 to 10 years but the more likely average is 5 to 6 years.

How do bluebirds incubate their eggs?
The female develops a brood patch, which is a bare patch of skin where the feathers fall out of the belly/breast area before incubation begins.  This warm skin patch , which is swollen with blood vessels, is then placed directly on the eggs or the hatchlings during their first week or so, to keep them warm.  The female also carefully turns and rotates the eggs to ensure even incubation.  During incubation and brooding, the female spends most of her time on the nest,  with the male bringing  food for her and for the chicks once they hatch. Most male birds, including bluebirds, do not have a brood patch and they cannot incubate the eggs.  Male birds will sometimes temporarily cover the eggs or chicks when the female leaves the nest briefly.  In this way he can provide some warmth and also protection  from predators. 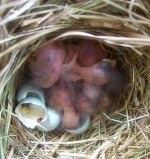 How do birds get out of the egg?
When the baby bird is ready to hatch, it uses an egg tooth that has developed on its beak just for the purpose of pecking out of the shell.  The process is called pipping.  The egg tooth is on the end of the upper beak, and falls off soon after the bird hatches.  After hatching, the adult birds either eat the egg shells (a good source of calcium), or carry them out of the nest to deposit elsewhere.

How do bluebirds keep their nests clean?
Bluebirds not only haul food in to their nestlings, they also clean up after them.  Waste materials of the young are enclosed in a slimy sac, called a fecal sac.  After the young birds have been fed, they twist their bodies around, lift their behinds up to the nest edge, and deposit a fecal sac on the rim of the nest cup.  The parents pick up the sac, carry it outside, and deposit it away from the nest.  The resulting odor free nest/nest area will not attract predators.

How do you prevent predators from destroying bluebird nests, eggs and nestlings?
There is no way to completely protect bluebird nests from predators. However, there are several things that you can do to reduce the risk of predation.

Avian predators:
You can minimize predation by starlings, jays and American Kestrels by using nest boxes that are approved by the North American Bluebird Society. In the Willamette Valley, we recommend that nest boxes have an entrance hole that is 1-1/2″ in diameter. This is too small to admit these larger birds. The nest boxes need to have sufficient depth below the entrance hole to keep these birds from reaching eggs or chicks by sticking their heads into the nest box. Cleaning out old nests after the young fledge will also help keep the next nest that is built low enough to protect eggs and young.

The European House Sparrow poses a major threat to Western Bluebirds and is  small enough to enter a bluebird nest box. House sparrows may peck holes in the eggs, kill nestlings and even kill adult birds if they find them in the nest box. The best defense against house sparrows is to place nest boxes in open areas away from barns and other buildings where house sparrows are present and not using millet seed in bird feeders. This invasive, non-native bird is not protected by law.  So a good defense is to remove house sparrow nests and eggs wherever you encounter them.  Caution:  When removing House Sparrow nests where there are native species nesting nearby, or if natives attempt nesting in the box previously occupied by House Sparrow, the male House Sparrow may destroy eggs, young, and adults in an attempt to claim a nest box for his own brood.

Animal predators:
House cats and raccoons are the most common animal predators. The best way to protect bluebirds from cats is to keep cats indoors.  Where nest boxes are in unprotected areas the best way to deter predators is to mount the nest box on a metal or pvc pole and use a multi-purpose lithium grease on the pole.  If the box is mounted on a wood post a metal baffle mounted under the nest box may help.   These methods may also help to deter snakes.  Details for these and other predator control devices are available on the North American Bluebird Society web site under “Fact Sheets.” You can find the NABS web site at www.nabluebirdsociety.org 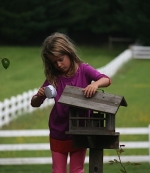 How can I attract bluebirds to my backyard?
Bluebirds are really grassland birds.  It is difficult to attract them to urban or heavily wooded property.  Most bluebirds prefer open fields with one or two large oak trees, pastures, vineyards, old orchards or large mowed yards with selected medium-sized trees for nest guarding.  Nest boxes should be placed out in the open on fence posts or metal poles not nestled into groves of trees.
Bluebirds are primarily insect eaters.  They do like berries, but they are rarely attracted to the typical bird feeding stations that offer a variety of seeds.  They like spiders, crickets, ants, grubs and small worms.  Once bluebirds start nesting, you can offer mealworms to help the parent birds feed their nestlings during cold, rainy weather.

Where do our bluebirds go in the winter?
Bluebirds in the northern Willamette Valley do not migrate south for the winter.  They tend to join small flocks and forage on insects and dried berries.  They will move to lower elevations if the winter is very cold.  Sometimes they will roost overnight in a nest box during the bitterest weather.